Jorge A. Ganoza, President and CEO, commented, “We have reported a record breaking quarter in sales and free cash flow as we continue to capitalize on the current metals price environment through solid production results and cost containment measures.”   Mr. Ganoza continued, “At Lindero, the ramp-up phase is progressing with first gold pour achieved in October.” Mr. Ganoza concluded, “We remain on track for commercial production at Lindero in the first quarter of 2021.”

The COVID-19 pandemic continues to impact economies around the world and our operations.  In response to the pandemic, the Governments of Mexico, Peru and Argentina implemented measures to curb the spread of COVID-19, which included among others, the closure of international borders, temporary suspension of all non-essential activities, and the declaration of mandatory quarantine periods.  Certain of these measures have either been eliminated or relaxed during the third quarter.

The Company is managing the necessary country-by-country restrictions in order to assist in the protection of those most vulnerable.  At each of our mine sites, health protocols are in place for control, isolation and quarantine, as necessary, and these continue to be reviewed and adjusted accordingly based on the circumstances at each location. Operations at the Caylloma Mine were temporarily suspended for a 21-day period in July to among other things sanitize and disinfect the mine and make infrastructure improvements to accommodate social distance guidelines.  As a result of the shutdown, approximately $0.9 million has been recorded as care and maintenance costs.

In April 2020, the Company withdrew its production and cost guidance for the year until further notice due to the uncertainties related to the impact caused by COVID-19 constraints on the Company's business and operations (refer to Fortuna news release dated April 2, 2020). 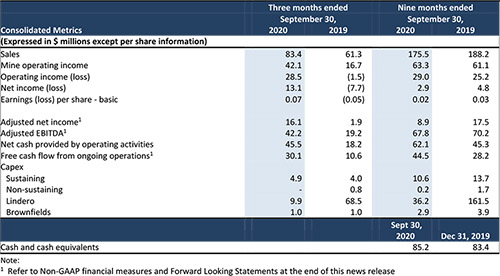 Operating incomefor the three months ended September 30, 2020 was $28.5 million, an increase of $30.0 million from a $1.5 million operating loss reported in the same period in 2019.  The operating loss in 2019 was impacted by an $8.3 million foreign exchange loss related to the VAT construction receivable in Argentina.  Excluding the effect of foreign exchange, our higher operating income in the third quarter was driven by higher precious metal prices and higher volumes of silver and gold ounces sold despite a 21-day shutdown that lowered sales volume at the Caylloma Mine. Other factors increasing operating income were lower cash production costs, and lower exploration and evaluation costs of $1.4 million, which were partially offset by higher share-based payment expense of $2.2 million.  The Company’s increased share price performance during this quarter directly impacted the value of our cash-settled share awards.

Net income for the three months ended September 30, 2020 was $13.1 million, a $20.8 million increase over the $7.7 million net loss reported in the same period in 2019.  The effective tax rate for the quarter was 53% which reflects a negative impact of approximately 7 percentage points derived from the devaluation of the Mexican peso.

Free cash flow from ongoing operations for the three months ended September 30, 2020 was $30.1 million compared to $10.6 million in the same period in 2019.  Net cash provided by operating activities for the quarter increased $27.3 million to $45.5 million. 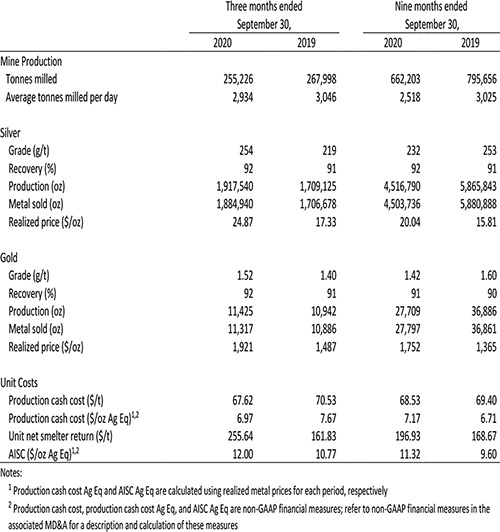 All-in sustaining cash cost per ounce of payable silver equivalent was $12.0 for the quarter compared to $10.77 for the comparable period in 2019, due mainly to higher royalties and worker participation expenses related to higher sales and profits. 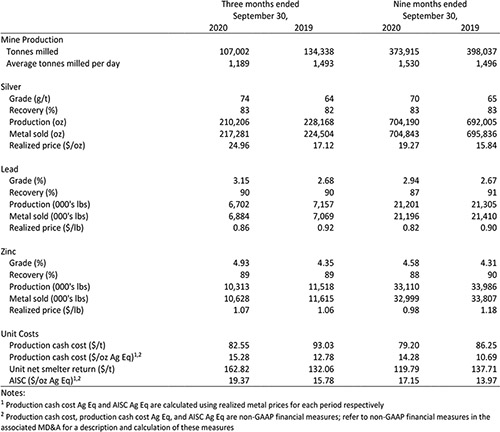 Cash cost per tonne of processed ore for the three months ended September 30, 2020 was $82.55, which was 11% lower than the $93.03 cash cost per tonne in the same period in 2019.  The lower cash cost per tonne was due to lower mine preparation as a result of cost-cutting efforts related to Covid-19.  Cash costs incurred during the shutdown were reported as care and maintenance costs.

All-in sustaining cash cost per ounce of payable silver equivalent was $19.37 for the quarter compared to $15.78 for the comparable period in 2019, due to the impact of the 21-day voluntary suspension at the mine site in July.

Construction at the Lindero open pit heap leach gold mine located in Salta Province, Argentina is substantially complete as at September 30, 2020.  On October 20, 2020, the Company announced the first gold pour of 728 ounces (refer to Fortuna news release dated October 20, 2020) as the mine ramps up towards commercial production in the first quarter of 2021.

The following table summarizes the spending on construction and preproduction related costs at the Lindero Mine for the nine months ended September 30, 2020:

There were $15.2 million of construction trade payables outstanding as at the end of the third quarter.

During the third quarter of 2020, a total of 675,000 tonnes of ore have been placed on the leach pad averaging 0.83 g/t gold, containing an estimated 17,980 ounces of gold (refer to Fortuna news release dated October 14, 2020). Average gold head grade of ore placed on the leach pad is below budget of 1.00 g/t to 1.10 g/t (refer to Fortuna news release dated May 8, 2020). The lower average head grade is due to COVID-19 related restrictions which delayed the start of mining activities and limited the access to high-grade ore from the pit and resulted in the shortfall being sourced from the medium grade stockpile.

Management confirms the reconciliation of the material movements from the pit for the third quarter of 2020 as satisfactory and indicates a good correlation between the grade control model versus the Mineral Reserve block model with differences of less than five percent for tonnes, grade and ounces (refer to Fortuna news release October 14, 2020).

Management has updated the production forecast for Lindero in 2020 and estimates between 13,000 to 15,000 ounces of gold doré will be produced (refer to Fortuna news release dated May 8, 2020). The new forecast considers the following operational issues which were encountered during commissioning and ramp-up activities:

Eric Chapman, Vice President of Technical Services, is a Professional Geoscientist of the Association of Professional Engineers and Geoscientists of the Province of British Columbia (Registration Number 36328), and is the Company’s Qualified Person (as defined by National Instrument 43-101). Mr. Chapman has reviewed and approved the scientific and technical information contained in this news release and has verified the underlying data.

The following tables represent the calculation of certain non-GAAP financial measures as referenced in this news release.

Reconciliation to Adjusted Net Income for the three and nine months ended September 30, 2020 and 2019 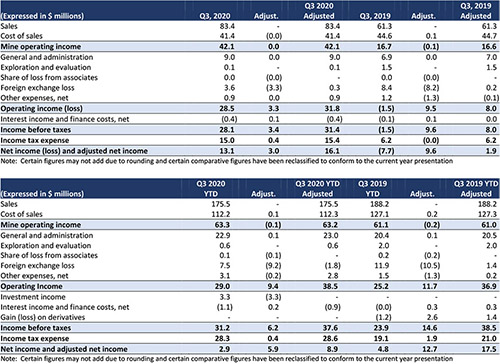 Reconciliation to Adjusted EBITDA for the three and nine months ended September 30, 2020 and 2019

Reconciliation to free cash flow from ongoing operations for the three and nine months ended September 30, 2020 and 2019

The financial statements and MD&A are available on SEDAR and on the Company's website:
https://www.fortunasilver.com/investors/financials/2020/.

A conference call to discuss the financial and operational results will be held on Friday, November 13, 2020 at 9:00 a.m. Pacific time | 12:00 p.m. Eastern time. Hosting the call will be Jorge A. Ganoza, President and CEO, and Luis D. Ganoza, Chief Financial Officer.

Shareholders, analysts, media and interested investors are invited to listen to the live conference call by logging onto the webcast at: https://www.webcaster4.com/Webcast/Page/1696/38330 or over the phone by dialing in just prior to the starting time.

Fortuna Silver Mines Inc. is a Canadian precious metals mining company with operations in Peru, Mexico and Argentina. Sustainability is integral to all our operations and relationships. We produce silver and gold and generate shared value over the long-term for our shareholders and stakeholders through efficient production, environmental protection, and social responsibility.  For more information, please visit our website at www.fortunasilver.com.

Forward looking Statements involve known and unknown risks, uncertainties and other factors which may cause the actual results, performance or achievements of the Company to be materially different from any results, performance or achievements expressed or implied by the Forward looking Statements. Such uncertainties and factors include, among others, the duration and effects of COVID-19, and any other pandemics on our operations and workforce, and the effects on global economies and society; changes in general economic conditions and financial markets; changes in prices for gold, silver and other metals; fluctuation in foreign exchange rates; any extension of the currency controls in Argentina; technological and operational hazards in Fortuna's mining and mine development activities; delays in commissioning at Lindero; delays in achieving steady production and commencement of commercial production at Lindero; risks inherent in mineral exploration; uncertainties inherent in the estimation of mineral reserves, mineral resources, and metal recoveries; governmental and other approvals; political unrest or instability in countries where Fortuna is active; labor relations issues; as well as those factors discussed under "Risk Factors" in the Company's Annual Information Form. Although the Company has attempted to identify important factors that could cause actual actions, events or results to differ materially from those described in Forward looking Statements, there may be other factors that cause actions, events or results to differ from those anticipated, estimated or intended.

This news release also refers to non-GAAP financial measures, such as cash cost per tonne of processed ore; cash cost per payable ounce of silver; total production cost per tonne; all-in sustaining cash cost; all-in cash cost silver equivalent; adjusted net (loss) income; operating cash flow per share before changes in working capital, income taxes, and interest income; free cashflow from ongoing operations; and adjusted EBITDA. These measures do not have a standardized meaning or method of calculation, even though the descriptions of such measures may be similar. These performance measures have no meaning under International Financial Reporting Standards (IFRS) and therefore, amounts presented may not be comparable to similar data presented by other mining companies.